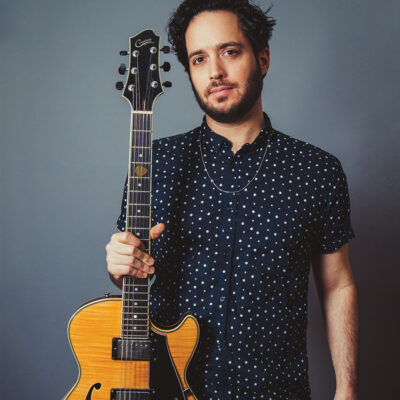 As a young musician in Tel Aviv, Yotam Silberstein was quickly recognized as a prodigy and was invited to perform with many of the nation’s top musicians. At 21, he performed at Italy’s renowned Umbria Jazz Festival, released a critically acclaimed debut album and set out on an extensive tour of Europe. Upon receiving a scholarship to the prestigious New School, Yotam Silberstein moved to New York in 2005. He was a finalist in the Thelonious MonkInternational Jazz Guitar Competition in 2005 with one critic noting: “Yotam’s tones are exquisitely old school but his playing fresh, fiery and bursting with joyful exuberance, and musically he is one heavy cat.” Jazz Times noted that Yotam has “made an impact on the scene with his precision bebop lines and fleet fingered improvisation”. All About Jazz saw a resemblance between his 2009 release, “Next Page” and “the heyday of Blue Note Records”, adding that Yotam is “forging his own path with skills and style.”