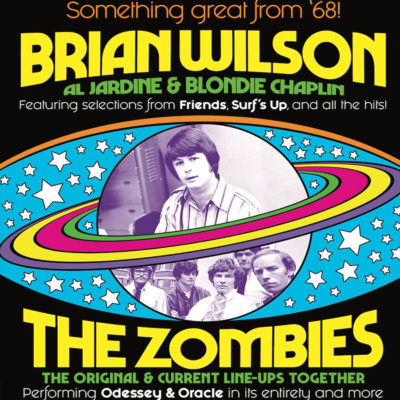 back to list
Brian Douglas Wilson from Inglewood, California, united States of America. Is a Rock and pop singer starting in 1961 he is currently signed to Capitol/Emi.

It could be said that Brian was born to be a musician, from an early age, Brian was encouraged to follow in a similar path to his father who was a minor musician and songwriter. Singing solos in the church, learning how to play a toy accordion and teaching his brothers how to sing harmony when they were meant to be asleep. Music was something that Brian breathed. Sadly it was also found that Brian had diminished hearing, the exact cause of this remains the subject of speculation.

In 1961 while his parents were away Brian would go on to use the emergency money they had left behind to hire out musical equipment however the money left behind was not enough. A family friend; Al Jardine, then went to his mother begging for money after she heard the band consisting of: Brian and his younger siblings - Carl and Dennis alongside Mike Love. The mother of Al Jardine handed the band money to rent equipment after she had heard how talented the boys were.

Upon returning home, the father of the boys was very angry until he heard them play, he was stunned and immediately took them to go and record music, they would do this under "Candix Records" where they released the song "surfin" which managed to chart on Billboard, sparking Brian's career. Candix had also changed the bands name to "The Beach Boys" without the actual band knowing as they were previously called "The Pendletones".

"Pet Sounds" was released in 1966 by Wilsons' band "The Beach Boys" and contains the nationally successful song "God Only Knows" which has recently been used by the BBC as the main song, sung by many artists for an advert.

The advert includes many celebrities such as: Elton John, Chris Martin Pharrell Williams and Emile Sande alongside various others.

The album has also been considered one of the greatest albums of all time.

Brian Wilson has been inducted into the Rock and Roll Hall of Fame and has won multiple Grammy awards for musical work.

The Zombies are a psychedelic rock band from St Albans, UK who since their formation in 1961 have had more splits and reincarnations than most.

The original line up: Colin Blunstone (lead vocals), Rod Argent (organ), Paul Atkinson (guitar), Chris White (bass) and Hugh Grundy (drums) met at school and started playing locally at Rugby clubs in their hometown. Early in their career the band were invited to play in a battle of the bands competition hosted by London Evening News which they went onto win, eventually scoring a record deal with Decca Records. Here they released their first chart success with “She’s Not There” in 1964 which peaked in the charts at number 12. Later that year it was released in the US and achieved similar success proving popular on many radio stations.

Following in the footsteps of the British invasion, the band embarked on their first US trip as they promoted the new single release by playing up to seven performances a day. It was their injection of jazz and Blunstone’s distinctive raspy vocals which made them stand out in the current trend of British rock music which was lapped up across the pond. In 1965 The Zombies made their debut US television appearance on the show Hullabaloo performing the hit single “She’s Not There” in front of an audience of screaming teenage girls, hysteria had definitely set in. With the US market embracing the band, they released their next single “Tell Her No” which peaked in the US charts at number six but failed to reach the top 40 in their homeland. In 1965 The Zombies released their debut album “Begin Here” which contained a mixture of original and classic R&B covers.

In 1967 the band signed to CBS Records with whom they recorded the follow up album “Odessey and Oracle” released the following year. With the album being recorded on a tight budget and time frame, tensions were high in the band during the recording process as disagreements arose regarding creative differences. So much so that the band called it quits before the album was even released. The album only received a US release and despite no longer being a functioning band, the single “Time of the Season” went to number three on the Billboard charts in 1969.

Following the split of The Zombies, Rob Argent pursued his own project called Argent in 1968 with Chris White joining him as principal songwriter. While Colin Blunstone embarked on a solo career, Paul Atkinson and Hugh Grundy stepped out of the spotlight working behind the scenes with Columbia Records.

In 1990 the band briefly reformed with Blunstone, Grundy and White to record the 1991 album “New World” alongside Argent and Atkinson and featured several guests on guitar. In 1997 The Zombies released their ultimate greatest hits compilation “Zombie Heaven” featuring a staggering 120 tracks which included some previously unreleased material. To promote its release, the band joined Blunstone at his solo performance at London’s Jazz Café to perform their hit singles “She’s Not Here” and “Time of the Season”.

In honour of the 40th anniversary of the album “Odessey and Oracle” the surviving members Blunstone and Argent accompanied by Keith Airey and Jim and Steve Rodford, the band performed three nights at London’s Shepherd’s Bush Empire in 2008 which was recorded and released as a live DVD.

The band continue to tour the US, Canada and Europe annually and in their prolific career have influenced the likes of Super Furry Animals, Badly Drawn Boys and Arctic Monkeys.