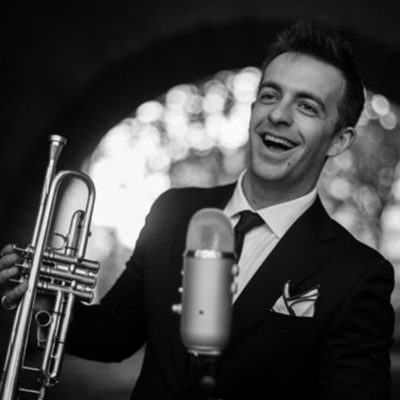 back to list
At the age of 27, Pittsburgh-born, New York-based Jazz trumpeter & singer Benny Benack III has quickly established himself as one of the most versatile and virtuosic voices of his generation. Hailed by the New York Times as “a charismatic young trumpeter who maintains an earnest sideline as a singer”, Benack has a knack for delighting audiences with panache, in the spirit of classic crooners like Sinatra & Mel Tormé, with a nod to legendary trumpet showmen Louis Armstrong & Dizzy Gillespie.

Equally comfortable in both Jazz and Pop settings, Benack has worked with some of the greatest acts in music today, touring domestically as a trumpet soloist with Josh Groban, Ben Folds, fashion icon Isaac Mizrahi, as well as European engagements with Jazz Bass extraordinaire Christian McBride. He recently headlined Birdland Jazz Club alongside Cabaret legend Ann Hampton-Callaway, in tribute to “Louis & Ella”. Benny's been a guest artist with the Pittsburgh Symphony Pops Orchestra, the Columbus Jazz Orchestra, the Minsk Philharmonic Orchestra, featured both as a vocalist and trumpeter with each ensemble.

In the Fall of 2017, Benack released his debut album “One of a Kind” to critical acclaim, noting he “reels off songs that come alive with his lustrous trumpet and golden bari-tenor vocalastics” - World Music Report. On the heels of his album’s worldwide success, Benack maintains an active touring schedule internationally, most recently bringing his band to Shanghai on behalf of Jazz at Lincoln Center, helping to open their new flagship club there. When at home in NYC, he can be found in residency both at Mezzrow Jazz Club in the West Village, and at the iconic Carlyle Hotel, performing in Bemelmen’s Bar with his trio, where Benack showcases yet another talent by accompanying his own vocals on the piano as well.