<![endif]--> Basquiat’s “Defacement” at the Guggenheim Museum | Tune In | GrandLife 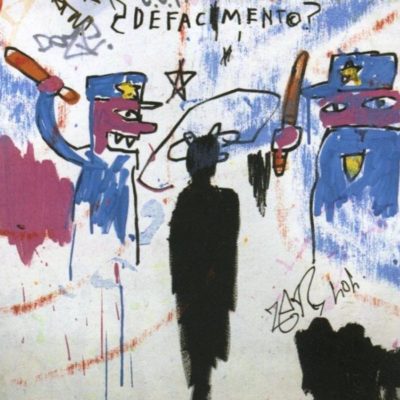 Basquiat’s “Defacement” at the Guggenheim Museum

back to list
This exhibition takes as its starting point the painting The Death of Michael Stewart, informally known as Defacement, created by Jean-Michel Basquiat (1960–1988) in 1983. The work commemorates the fate of the young, black artist Michael Stewart at the hands of New York City Transit Police after allegedly tagging a wall in an East Village subway station. Originally painted on the wall of Keith Haring’s studio within a week of Stewart’s death, Basquiat’s painting was a deeply personal lamentation that has rarely been exhibited in a public context. With The Death of Michael Stewart as its centerpiece, this exhibition examines Basquiat’s exploration of black identity, his protest against police brutality, and his attempts to craft a singular aesthetic language of empowerment. Several of the works on view by Basquiat illustrate his sustained engagement with the subject of state authority in the paintings depicting police figures. Other works explore his canonization of historical black figures, especially the jazz legend Charlie Parker, who was perhaps Basquiat’s favorite hero to depict on canvas. An early self-portrait, created the same year as The Death of Michael Stewart, suggests Basquiat’s keen self-awareness as a black artist navigating a predominantly white and often hostile art world.

The exhibition is a testament to the tremendous impact Michael Stewart’s death and the subsequent trial had on the circle of downtown artists for whom Stewart was a peer. To illustrate the solidarity experienced within this community at the time, paintings and prints by other artists also are on view: Haring’s Michael Stewart—USA for Africa (1985); Andy Warhol’s screenprinted “headline” painting from 1983 incorporating a New York Daily News article on Stewart’s death; David Hammons’s stenciled print The Man Nobody Killed (1986): George Condo’s Portrait of Michael Stewart (1983) and Lyle Ashton Harris’s photographic self-portrait Saint Michael Stewart (1994). The presentation also features ephemera related to Stewart’s death, including newspaper clippings and protest posters, along with artworks from Stewart’s estate. Together, these objects poignantly document the sorrow—and defiance—of a grieving community that created a moment in art history that has not been fully articulated and explored until now.

The exhibition is organized by Chaédria LaBouvier, Guest Curator