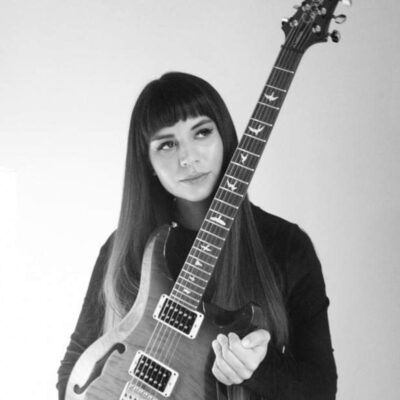 back to list
Alicyn Yaffee is a New York City-based guitarist, vocalist and bassist, by way of Kelseyville, California. An artist of wide range and depth, she earned her BM in Jazz Studies, with a Double Major of Guitar and Vocals, at Cal State University in Sacramento. In the few years since the move to New York, she has toured the U.S. and Europe under her own name, as well as with Becca Stevens band, Grammy-nominee JC Hopkins’ Biggish Band, Jazz/ Soul singer Allan Harris and bassist Benny Rietveld (Santana ); released her first solo album, “Someone Else”, featuring Cindy Blackman Santana, Ronnie Foster, Jeff Cressman; and played numerous venues with her own groups and with a diverse range of jazz and rock artists, including jazz trumpeter Bria Skonberg, soul artist Tiana Major9, Haitian singer Darlene Desca and Indian progressive rock composer Anupam Shobhakar. She has opened for artists David Lindley and Masta Ace and is currently working on her second solo album.