<![endif]--> City of Kings: A History of NYC Graffiti | Culture|GrandLife

City of Kings: A History of NYC Graffiti

Lower East Side or Lower Manhattan—I’d see Al Diaz around when we were all going through various stages or versions of growing up. Some might call it coming of age but that’s almost too literary for what we were doing. Al had been tagging the trains and the alleys and the walls of buildings since the early 1970s when he was maybe thirteen—writing graffiti with the tag BOMB-1. By then I was already in the clubs looking for trouble. He was a young teenager and I was probably 19 or 20—we were just kids running the streets when there was still room to run.

It would be years before I connected with Al Diaz and by then we had several close mutual friends—among them the illustrator Julie Wilson and the Director of HOWL Arts, Jane Friedman. Somewhere along the way, Al became SAMO© with his partner in crime Jean-Michel Basquiat. He had an association with Goth-futurist Rammellzee and Rapper K-Rob, dabbled in percussion and offered collaboration on at least one legendary track, “Beat Bop.” All the while Al kept working and becoming the celebrated artist he is today.

Before we get too deep into the details, let’s let Al fill in the blanks and tell us a bit about those early years, painting the town and his current project, New York City of Kings, the sprawling, landmark history of Graffiti show he’s put together at HOWL! Happening and HOWL Arts! / Howl Archive. 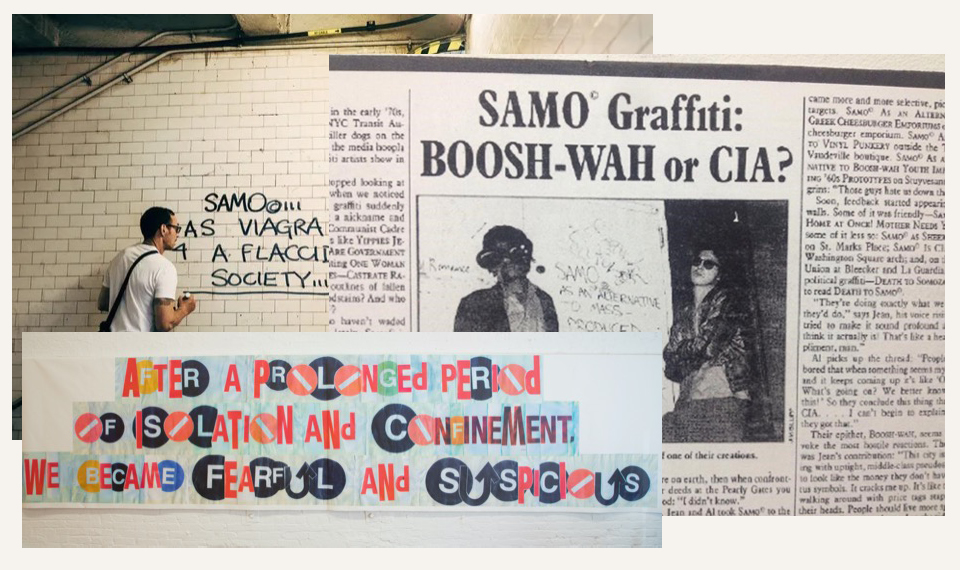 Richard Boch: Hi Al. The double gallery show at HOWL sounds great but let’s go back to when you were a kid on the Lower East Side. When did you pick up that first can of spray paint and what did that feel like?

Al Diaz: It was 1971. I was 12 and looking to find my identity as a young teenager. I had been spending time with my cousins up in Washington Heights for years and was impressed with the style that the kids uptown had. They had a certain edge that was different from kids on the LES—and they were writing their names on the walls. I hadn’t seen this downtown before and ended up being one of the earliest kids importing graffiti to the LES. Others would follow shortly after.

RB: So, your original tag was BOMB-1 or BOMB ONE. Where did you go from there? When did you start collaborating with other artists?

AD: I was like most writers of the early 1970s—starting out as a “toy” or just a newbie trying to develop a cool “signature,” writing on public walls, park surfaces and hallways, eventually graduating to buses and trucks and finally, the subway. I dove head first into it for at least five years and by 1976 had established a reputation as a respected graffiti artist. I believe I was “collaborating” with others every time we planned an excursion to go paint. For some of us, it was partially about the camaraderie, which goes hand in hand with cooperation.

RB: How and when did SAMO© get started?

AD: After I was kicked out of High School of Art and Design, I slowed down on the writing, transferred to City As a School, met Jean-Michel Basquiat, and created SAMO© in 1978. A sort of “Conceptual-Art-Graffiti” campaign. We did that until early 1979, attained some local notoriety and inevitably went in different directions…. I don’t think I ever really stopped writing on public spaces but I certainly slowed down until 2016  when I revived SAMO©… I was absolutely tired of hearing the skewed SAMO© narrative. An entire generation was under the impression that SAMO©… was Basquiat’s nickname. It was never a person—it was a product that we both collaboratively created and advertised.

I had a good run for a while hitting mostly subway stations with a new crop of SAMO©… writings. They were true to the original format but came from a much older person’s perspective. It started around Election Day 2016 into February 2019, when I was issued a warrant from the Citywide Vandal Task Force. After a month of cat and mouse, I eventually had to give myself up. After a day of being locked up, I decided it was time to “put a cap on it.” 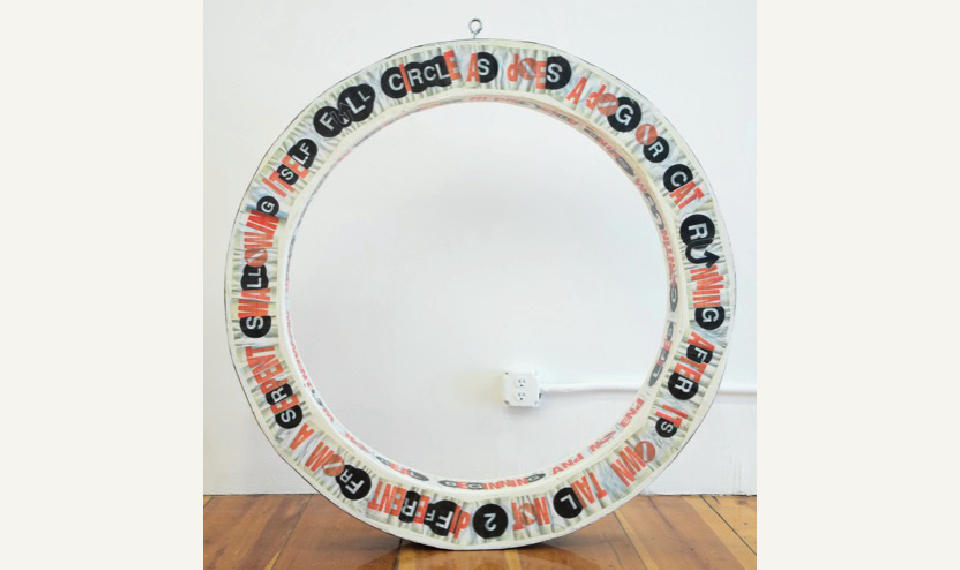 RB: What’s with WET PAINT—two words that are so loaded and can mean so much?

AD: WET PAINT is a project I began in 2009. I thought it was wasteful how these MTA signs would end up in the trash after one use, so I began collecting them with the intention of making some sort of art. I ended up using the WET PAINT signs along with the symbols and characters from the subway to form a constrained alphabet which I employ to create messages, poems, anecdotes and social commentary.  It is an ever-evolving process and limitlessly challenging. The use of the subway letters and the fact that the project is language-based expresses both my lifelong relationship with the subway and the ongoing SAMO©…  public monologue. I authored a book on the history of the SAMO©… graffiti in 2018 (SAMO©… Since 1978). I have plans to put a WET PAINT book together this coming year. 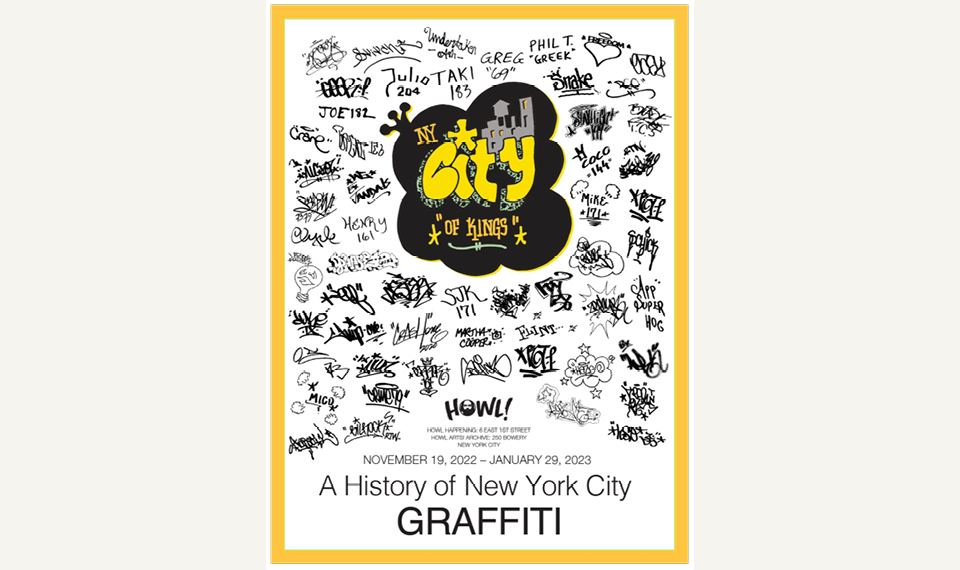 RB: You’ve always been a working artist and a bit of a legendary figure—some might call you an icon or even a hero when it comes to the street work. Now you’re bringing so much of that work and your experience together at HOWL for this big show. Given the very real acceptance and significance of graffiti, and having witnessed it move from the streets and trains to the walls of galleries and museums, how does make you feel?

AD: Last fall, Howl asked me if I would curate a graffiti show! I said I would but it would have to be a pedagogical/didactic type thing. I felt it was necessary to tell the NYC story but also celebrate the culture as a whole. I didn’t want just another greatest hits album. Something that would illustrate just how impactful a subculture born on the street has been on popular culture. My access to both HOWL and the graffiti community made this possible. I am proud of this accomplishment which would have been impossible without my co-curators Mariah Fox and Eric Felisbret. I am merely a middleman, grateful to be given an opportunity to tell this story.

RB: Al, thanks so much for having this conversation, really a pleasure. Now all that’s left to ask is what’s next and where do you go from here?

AD: I have a scheduled trip to Barcelona in March 2023. CANAL Gallery which is owned by Balú, a street artist and huge supporter of the NYC graffiti community, invited me there to produce and show works made in Barcelona. Among other things we plan on utilizing the signage from the Barcelona Metro System to create work much like what I do with the WET PAINT and Subway signage here in NYC. Hopefully, I’ll get to work on my WET PAINT book this spring.

Richard Boch writes GrandLife’s New York Stories column and is the author of The Mudd Club, a memoir recounting his time as doorman at the legendary New York nightspot, which doubled as a clubhouse for the likes of Jean-Michel Basquiat, Keith Haring, Debbie Harry, Talking Heads and David Bowie, among others. To hear about Richard’s favorite New York spots for art, books, drinks, and more, read his Locals interview—here.