We talk with the visionary (and Bob Dylan-approved) luthier who makes guitars out of reclaimed wood from legendary NYC buildings like the Chelsea Hotel.

New York City’s history as a guitar town is as rich and storied as that of the world-changing music the city is responsible for spawning. There was a time when Manhattan’s 48th Street was hemmed by guitar shops that catered to everyone from fledgling rockers to iconic guitar heroes like Jimi Hendrix and Johnny Marr—who both famously frequented shops on the strip. For many years, Gretsch guitars were crafted in a factory on the Brooklyn waterfront. Sadly, 48th Street music shops are now all gone, however, in spite of the City’s perpetually changing face, NYC is still very much a guitar town and if you want a guitar that’s truly imbued with this place’s inimitable creative energy, you can do no better than a custom creation made by Cindy Hulej of Cindy Guitars.

Hulej works alongside master luthier Rick Kelly at Carmine Street Guitars in Greenwich Village. The guitars Hulej crafts in the charming, sawdust-riddled Carmine Street shop run the gamut from ultra-utilitarian workhorses to outrageously adorned instrumental works of art that not only represent the pinnacle of NYC’s artisan class but are made from a treasured cache of recycled ancient pine wood that’s been rescued from the guts of some of the Bowery’s most iconic buildings. Spaces that once served as the sites of some of Manhattan’s most important rock ’n’ roll moments or were otherwise a part of NYC music lore, like the Chelsea Hotel or Sammy’s Bowery Follies, have had the very boards of wood that held them together reborn in the form of lovingly crafted musical tools. Hulej’s guitars carry a sense of fun and playfulness that is often missing from the vintage-minded orthodoxy of the custom guitar world. Cindy Guitars wear leather jackets and have hand-tooled leather pickguards. They are painted with wild finishes or treated to painstakingly applied pyrography works. These guitars are unique by any standard, but with legendary cognoscenti like Bob Dylan, Bill Frissell, G.E. Smith, and Kurt Vile among Hulej and Kelly’s clientele, there’s no mistaking that they are serious instruments meant to be played.

GrandLife spoke with Hulej about her path from the art world into the guitar world, why Bowery pine guitars are much more than just a novelty, and which buildings Bob Dylan wanted his guitars made from.

How did you get started building guitars?

Cindy Hulej: I had just gotten laid off from a gig I had bartending in Rockefeller Center….I had good unemployment benefits and I was at the point where I didn’t want to try and get my art into galleries and didn’t want to work at a gallery. I had thought about guitar building but didn’t want to go to one of those luthier schools out west, so I came up with a list of builders I’d want to work with and Rick Kelly of Carmine Street Guitars was number one. I really liked that Rick was building guitars the old-school way and with old wood from famous buildings. I basically walked into the shop and told him my story, what I wanted to do and why. That was seven years ago. Rick said, “Take a seat by the computer, answer the phones, and I’ll show you the back of the shop.” I’ve been here ever since. 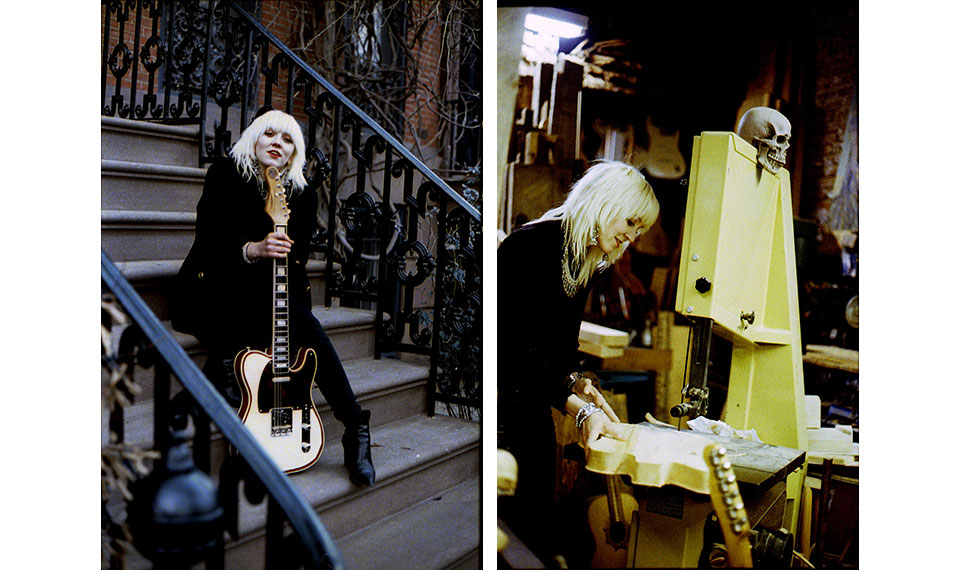 You and Rick make guitars out of wood from legendary NYC buildings like the Chelsea Hotel and Trinity Church. Can you tell us about that famous wood reserve and, aside from the novelty of its provenance, why using it makes for a great guitar?

CH: Rick’s been using the Bowery pine wood for over a decade now. The first boards of Bowery pine that Rick got were actually from Jim Jarmusch’s loft…He has been friends with Jim for a long time and when Jim’s loft on the Bowery was getting renovated, Rick talked to him about bringing some wood over to the shop during the process. Rick’s been collecting the pinewood ever since; we’ve got boards from the Chelsea Hotel, Chumley’s Speakeasy, Trinity Church, Sammy’s Bowery Follies—there’s been boards taken from so many iconic buildings.

Beyond the incredible history of the buildings, these boards came out of, it’s all old pine wood and the conifers these boards came from are some of the oldest in the world and they have very straight grains because those trees didn’t have to reach through a canopy to get sunlight. Some of these trees grew for 400 years, came down the Hudson and then aged indoors for another 150 to 200 years in these famous old buildings where they’d expand and contract with seasonal changes in humidity and temperature. The resins in the wood crystalize and the wood opens up becomes extremely resonant and light in weight. It makes guitars with a warmer tone and additionally because the wood is so seasoned and the grain is so straight, we can make necks with really big profiles like an old Gibson banner J-45s and they don’t need a truss rod because the old wood is so stable. G.E. Smith has been on tour with Roger Waters for over five years doing The Wall and he uses a bass we made him out of Bowery pine with no truss rod in it and has had no issues. So this wood is very special in addition to being historically relevant.

Can a client choose which building their guitar’s wood came from?

CH: Absolutely! Bob Dylan wanted his guitars made with wood from the Chelsea Hotel and Chumley’s because he remembered spilling beer on the floor and had special memories from those spots. People definitely relate to different buildings in different ways. Right now we’re building one that’s all wood from Trinity Church and I burned the face of it with an image of the cathedral window and the interior architecture—so it’s a cohesive thing, but very different from what anyone else is doing.

The whole story, from your walk-on apprenticeship with Rick to the instruments themselves and the clientele is a deeply New York tale.

CH: I think that a lot of people are starting to get it and catch on now, especially with the [Ron Mann-directed] documentary being out. For years, I dealt with people looking at my stuff and being like, eh, I don’t know, because it’s different from the norm, but the thing is that the playability, the tone, and the capability of living life as a workhorse of an instrument comes first for all of the guitars both Rick and I make. The artwork and adornment is something we both appreciate—Rick has a background in sculpture, by the way— and we both love that, but it’s really an added bonus to a guitar that’s made to work. I love being able to make creative, visually interesting instruments, but having a solid build and a great sound is the most important part of it. And the wear-and-tear they receive being used is just part of it; I love that some people play through some of the artwork and that’s just cool to me.

The other thing about our guitars is we often use the old patina on the necks and bodies because we like preserving their history while giving them new life. These wood boards have aged indoors and some of them have even been in fires, so they have a little charring to the outside layer. We’ll leave the burnt bits and coat that and make it part of the finish. We call those ones skimtops and we can make a neck that looks like one of those artfully aged or relic’d guitars that companies charge big bucks for, but it’s the actual way that wood has aged through its life. That’s an art in itself, but you can’t truly replicate time when it comes to the way wood sounds and looks. That patina can’t be faked. 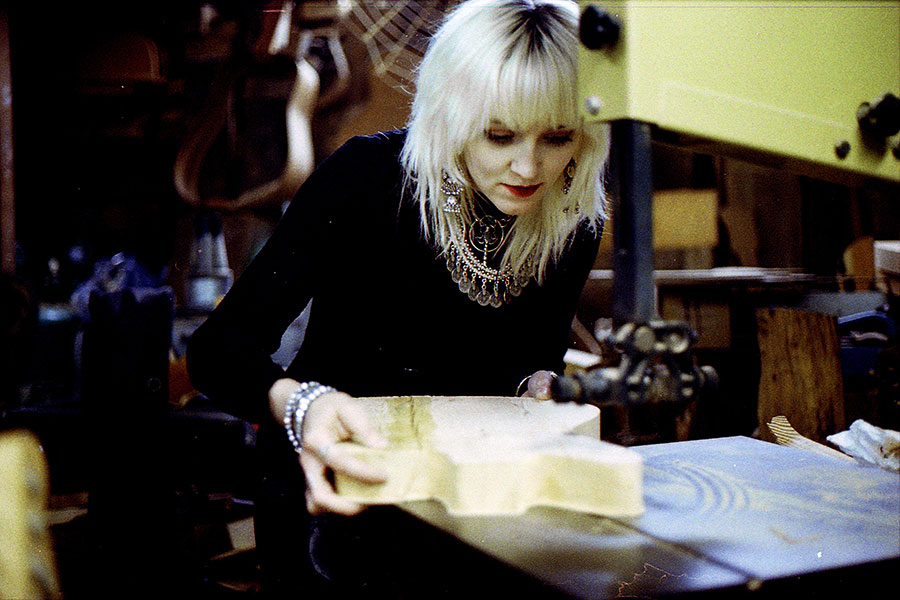 You mentioned Bob Dylan; which other notable clients have you built guitars for?

CH: Jim Jarmusch is obviously one; I did the guitar in his movie Paterson and I’ve made a couple of really cool pickguards for him. I just built a really cool take on a Fender offset-style guitar for Kurt Vile. Ian Docherty from July Talk has been with me since the beginning; he’s amazing and he’s got one of my signature models called the Cathedral. We also made him this really cool completely custom shape with just a bridge pickup, a volume knob, a Bigsby tremolo, and gargoyles on it to match the Cathedral guitar.

NYC has always been a guitar town, but a lot of its institutions have moved away or closed in recent years. What do you think about the changing face of NYC as a guitar city?

CH: There are a lot of people that want to do this. We have little luthier get-togethers and there are more people making custom guitars in New York than you’d think, but it’s a shame in terms of the old-school stores going out of business. New York’s always been a place that changed perpetually and it’s always developing in one way or another…. Then, on the other hand, you’ve got someone like Rudy Pensa, who moved his shop from 48th Street to a beautiful, crazy big store on Broome. It’s just one of those things with gentrification; you’ve got to support your locals. There are some cool builders and I don’t think the scene is dead at all, but there’s definitely nobody else with a shop like what we’ve got at Carmine Street Guitars. Carmine Street used to have seven guitar builders on it and now it’s mostly restaurants. The neighborhoods all go through changes but as long as there are people interested in what the locals are doing, things will be ok. People get lazy today and don’t look for the hidden treasures and gems, they just Google “What is there to do in New York?” and look at the same 15 things tourists look at, but there’s so much more going on beyond that in music and everything!

Where do you go in the city when you need inspiration?

CH: Oh God, it’s everywhere! I’m the person that gets yelled at for staring up at the building crowns and architecture instead of having my nose in my phone. I don’t have to look for it or go anywhere specific, I can walk around the corner and find inspiration literally anywhere here and I find inspiration in most things, you just have to have an open mind. For example, I came up with my Cathedral model just by walking behind St. John the Divine. I’d never seen it before, and I looked up and saw those old statues and I immediately thought, I have to come up with a guitar shape that can house gothic architecture! And that’s why I came up with that double-horned shape with the wooden pickup covers just so I could put more of that architecture on there. I do a lot of Bowery and NYC-themed pickguards and a lot of customers come up with cool New York ideas for their commissions and they usually have a special story about why they want something. I’m constantly taking photos and inspiration is really everywhere in this city for me.