I met Chi Chi Valenti and Johnny Dynell on White Street in 1979 when I was working the Mudd Club door. Johnny was still inhabiting his pre-Dynell uniqueness and lived nearby with the writer and art connoisseur Edit DeAk. It was around that same time that Chi Chi came strolling down the street and approached the door wearing a leather corset, peep-toe heels and a cape. Needless to say, I took notice and she came right in. In a sense, it’s where we all started and for a time, it was the center of the universe and the heart of the scene. Johnny became Johnny Dynell, the legendary DJ, and Chi Chi was on her way to becoming an icon and empress of the night. There’s a lot of history between way back then and here we are, and who would’ve thought by 2020, we’d still be going a little crazy in NYC. Moving forward with a nod to the wild-time days, past and present, let’s see what Chi Chi and Johnny have to say about it all.

Richard Boch: We’ve known one another forever—from our well-spent youth into our own version of adulthood—so let’s talk about 1979 and 1980 for a minute. The two of you met, hooked up, and fell in love at The Mudd Club or as Johnny likes to call it, “The Cradle of Civilization.” Johnny, what do you mean by that and what does that time mean to both of you today?

Johnny Dynell: It was a special time to be downtown in New York. I remember an older veteran of the ’60s Warhol scene telling me one night at Mudd, “Enjoy this now because it won’t last. It’s not always like this.” She was right. Mudd was this supernova that set in motion the birth of a thousand galaxies with thousands of stars. Scenes like AREA, Danceteria, and later Jackie 60 were just a few of those.

What’s really important about the period is that things were new. Punk was new, Disco was new—DJing, scratching, rapping, breakdancing, graffiti—it was all new….There was this fantastic cross-cultural pollination happening at Mudd between uptown and downtown. Keith Haring was making art in subway stations and hip hop artists were reworking the downtown punk feel. Today hip hop is huge and Jean Michel and Keith are titans of the art world. In a way, this all started at Mudd.

Chi Chi Valenti: I felt a part of this great continuum of NYC nightlife glamour. Coming home at 9am in Hollywood Babylon drag as the punters were off to work. We were living the dream—Scott and Zelda without the heavy drinking, a Busby Berkley “Lullaby of Broadway” montage with a bit of Weimar thrown in—we loved everything German in that Mudd moment. Those early years drew me in and began my life’s path. 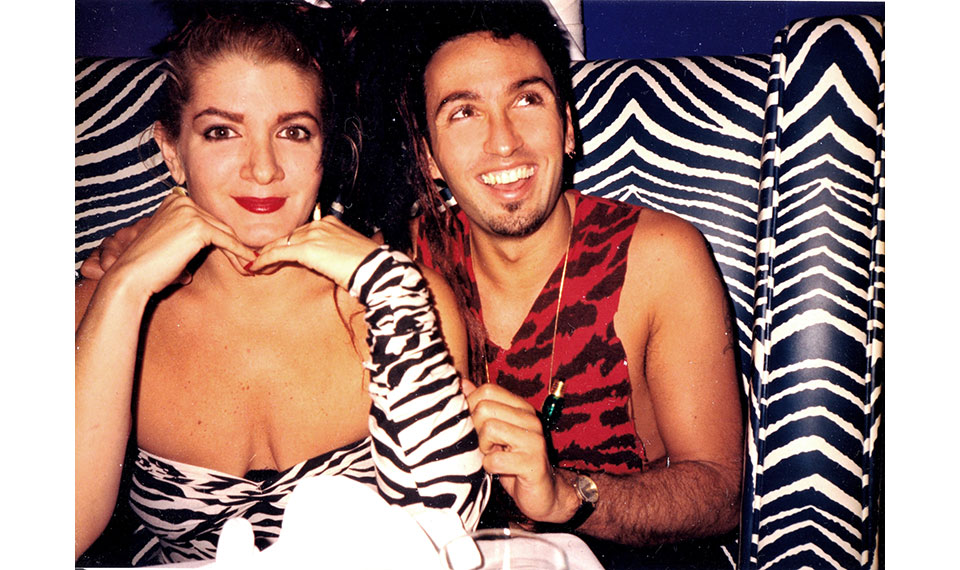 RB: Chi Chi, you were handling admission to the VIP-ish second floor and Johnny was DJing. After leaving Mudd, did you both wind up at Danceteria on 21st Street?

CC: I cherish those days on the door with you at Mudd—being shot at, having dead birds thrown at us et al. We left Mudd Club abruptly after a silly fight with owner Steve Mass. Johnny was already spinning at several after-hours clubs including The Jefferson, which we lived next door to on 14th Street, The Continental, and later AM/PM.  It was a fertile time for after-hours; the stories from those clubs seem cinematic, impossible, as do many of their denizens.

In 1982, Danceteria opened on 21st Street—its second and most famous iteration. We both worked there for the first few years. JD was a DJ on the main dancefloor, in great company with resident DJ Mark Kamins, and I was a bartender on the lounge-y third floor. We met so many lifelong friends and co-conspirators and learned a lot, especially from club visionary Rudolf Piper, that we would apply to our own venue a decade later.

When did you get married?

CC: JD and I had been living together almost since we met (see Richard’s Mudd Club book for that story), so in 1983, we decided to get married. Johnny had just released his first record Jam Hot. We went out to a club or worked in a club six nights a week so we weren’t eager to do a big wedding. Instead, we worked Halloween at Danceteria and flew the next morning to Quintana Roo, Mexico, where we eloped. 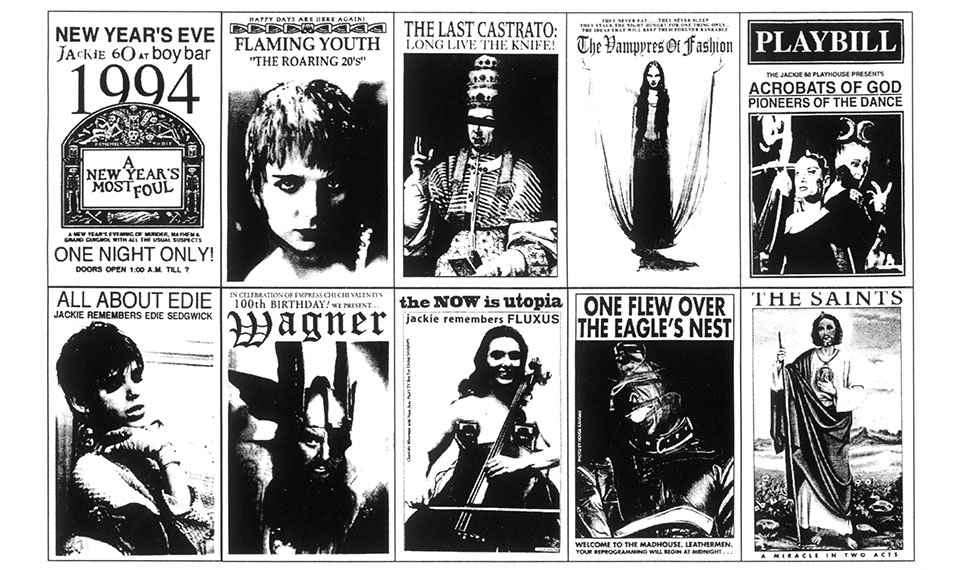 A selection of Jackie 60 invites, circa 1992 to 1999, designed by Johnny Dynell for The Jackie Factory

RB: I love that! You were a downtown nightlife power couple of your own making, forces of nature by way of White Street. What led to the idea for your first venture, Jackie 60, which came along in the early ’90s. Tell us about Jackie—the name, the concept and moving to the Meatpacking District when the neighborhood still packed meat…

CC: We spent the mid-to-late ’80s in a frenzy of creativity. In addition to becoming a journey woman show producer, I was writing on nightlife and culture topics for Details and i-D magazine. Johnny’s DJ stints at Area, Tunnel, and other venues along with his musical projects including Malcolm McLaren’s “Fans” and “Elements of Vogue” with David Ian Xtravaganza filled our evenings. Outside, the AIDS nightmare was raging and by 1990 we were feeling the absence of so many vibrant nocturnal creatures. We were disillusioned with the stale, over-commercialized state of the New York night post-Acid House and realized if we wanted an alternative we would have to do it ourselves.

With our collaborators—choreographer Richard Move and British fashion designer Kitty Boots—we set out to create a club environment that was both performance-oriented and distinctly underground. Beginning one night a week at the 14th Street nightclub Nell’s, we developed the “Jackie 60 formula”—weekly themes and live, stream-of-consciousness MCs. March 1991, we moved to a small bar in the then-seedy Meat Market district, which later became our underground venue MOTHER. To its fanatically mixed following, some of whom had abandoned clubs after Mudd, Jackie 60 fast became a mecca. Every week, Jackie’s decor, performers and soundtrack were transformed according to theme, which varied from Hasidic hip hop (“Fiddler In The Hood”) to classic murder mystery (“A New Year’s Most Foul”) to supermodel angst (“Pooped-Out Party Girls”). Audiences were asked to adhere to theme-specific dress codes, which were published on the weekly Xeroxed fliers. 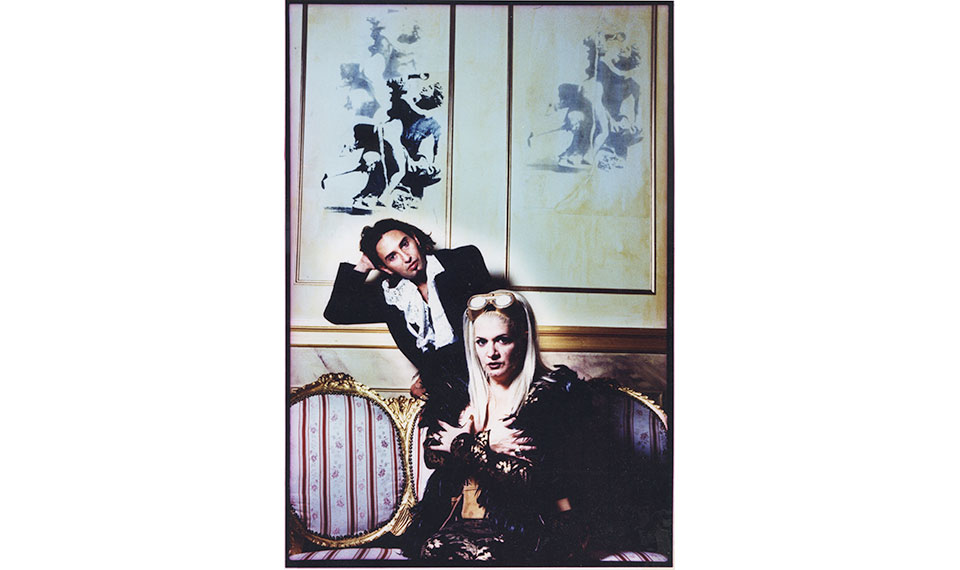 In the Versailles Room at MOTHER, designed and painted by Johnny Dynell, 1996; Photo by Barbara Gentile for Time Out NY

RB: By now, we’re in the year 2000 and it’s the new millennium! Both these places were very free form—yet very Chi Chi and Johnny. Was there something in between or was it a clean segue from Jackie 60 into MOTHER?

CC: By 1996, our merry band had outgrown the once-a-week time slot and our limited production facilities. Backed with little more than Jackie 60’s legend, Johnny and I took over the rundown premises on West 14th Street and tackled our greatest challenge yet—to apply “Jackie family values” to a full-time nightclub. From MOTHER’s opening that year until her closing in June 2000, she was an epicenter of Gotham’s nocturnal creativity where others learned the rarified art of creating imaginative club nights. The Jackie Factory collective, joined by Pyramid Club legend Hattie Hathaway, continued to create Jackie 60 every Tuesday. MOTHER also housed NYC’s first weekly vampire party, Long Black Veil, and the first edition of the iconic rock party Motherfucker.

JD: Both named by Chi Chi!

CC: Though Jackie had become an international nightlife landmark, by the late ’90s, we had done over 400 editions and knew it was time to leave. Our situationist roots were imploring us to do so—the Cabaret Voltaire had begun the nightclub century and we would end it. Jackie 60 closed on December 28, 1999, the last Tuesday of the old millennium. The last 40 weeks and closing night were filmed for a documentary. Twenty years later, you can look for The Last Jackie documentary further down the road.

RB: I would be remiss if I avoided asking about sex and drugs and the freedom those very early days afforded us all. Then by 1983, as we mentioned earlier, things went sideways with the onset of AIDS. There was a lot of pain and heartbreak but somehow a good number of us soldiered on, all the while keeping those we lost close to our hearts. How did nightlife change and how did the two of you change?

JD: AIDS obviously put a damper on nightlife in the ’80s. Sex and drugs went from being this celebratory experience to something that was dark and deadly, especially in gay clubs. Today with the new medications and therapies, it seems like the clock has turned back, kids are partying again like there’s no tomorrow. As a DJ, I’ve always loved the freedom of the dance floor. Now with Covid-19, and having lived this once before, I know we’ll get through it. 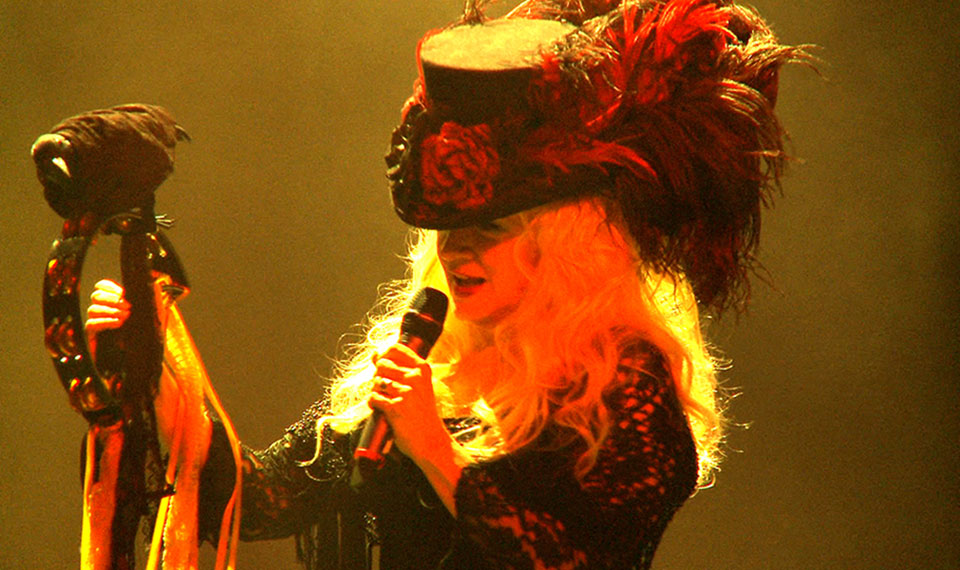 RB: Today you’re back and forth between home base NYC and a second home in New Orleans. And what about Night of 1000 Stevies, your long-running drag-fest-celebration honoring Stevie Nicks? I mean there’s got to be more than a touch of irony there!

CC/JD: Night of 1000 Stevies (NOTS) began as a one-night production during our first season of Jackie. I first heard Stevie at the Paradise Garage when “Stand Back” came out and I loved her witchy image. At my inaugural live Stevie show at Jones Beach to the first edition in 1991, NOTS was a burst of performance, twirling, and goddess worship with the best-dressed audience. Through the years its reputation grew, inspiring the feature film Gypsy 83, even becoming a Jeopardy question. We’ve sold out Irving Plaza for the past six years and made our New Orleans debut in 2019. There is nothing like the NOTS audience and we’re still mourning the cancellation of our 2020 edition. It would have been our 30th annual, at Sony Hall on Broadway.

RB: Thank you both for doing this. You must be itching to get the next Stevie extravaganza back or whatever else you’re thinking of doing. Do you have hope for nightlife’s future?

CC/JD: Coming from an era in NYC when the city was bankrupt on one hand and so culturally rich on another, we’re not so afraid!