PANYC: Preserving the Tactile History of an Anarchist Scene

There was a book launch a couple of weeks ago in lower Manhattan. That’s not exactly rarified news. But this was the launch for Manic Panic Living in Color, the crazed history and ongoing success story of punk pioneers Tish and Snooky, founders of Manic Panic makeup. Among a who’s-who of original 1970s Lower East Side punk nightlife was Camilla Saly, founder of PANYC (Punk Archive NYC)—a vast digital archive of punk rock ephemera that takes the preservation of those wild times to a wider scope.

“It was a great evening full of punk luminaries. ‘Old home week’ for some of us,” says Saly of the event that took place at Howl Happening gallery in the East Village with New York mainstays like John Holmstrom [Punk magazine creator], Tommy Wynbrandt from the Miamis, author and photographer Bob Gruen, and photographer Godlis in attendance.

Today, Saly is a trustee of the Morris-Jumel Mansion near 163rd Street—the oldest surviving home in Manhattan, and a fascinating museum of regional Revolutionary War history. But in 1973, she was a 14-year-old sneaking out of her Upper West Side home to visit Max’s Kansas City on Union Square and ogle the New York Dolls, Jayne County, Nancy Spungen, or Andy Warhol with her groupie pals. 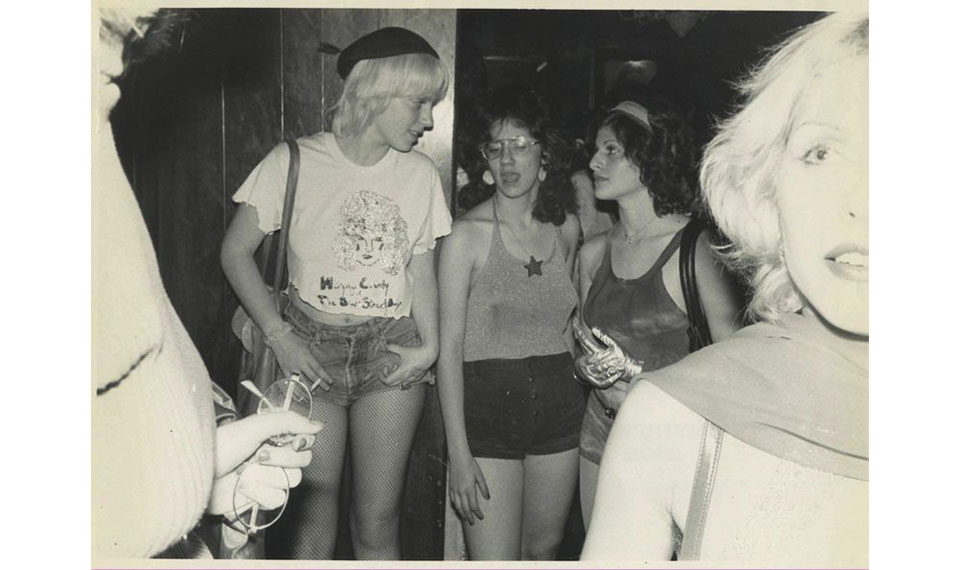 Camilla Saly (middle) with friends at Cub 82; Debbie Harry in foreground. Photography by Bob Gruen; from the collection of Camilla Saly

Saly was first wreck-room educated by her family’s upstairs babysitter, Ty Stix, who brought down all his crazy records to share (and eventually played with Johnny Thunders’ Heartbreakers while becoming a scene stalwart). So she entered her teen years well-versed and excited just as the searing explosion of glam rock and punk erased the floundering hippie era and made the early 1970s arguably the last great evolutionary leap for rock ’n’ roll. And Saly was in the center of it all, the Lower East Side of Manhattan.

Going up to Jimmy Page’s Plaza Hotel room; stumbling past Dee Dee Ramone at a show before he was a Ramone; seeing Debbie Harry in the Stilettos before Blondie formed (and liking the Stilettos much more); landing at CBGBs in its earliest days; and on and on, all before she had her driver’s license, which she probably never bothered getting because, hey, this is New York City. 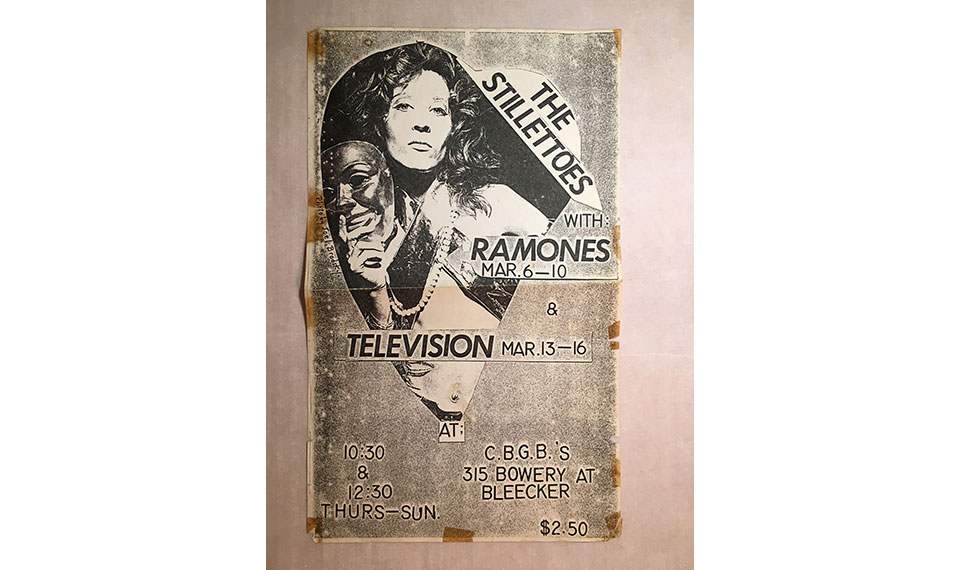 As the “cool bad old New York” myth expands, and the mid-70s Bowery is often painted as a completely barren landscape, Saly was quick to emphasize the sprawling nature of the scene—though, “sprawling” for lower Manhattanites usually means a 10-minute walk. “There was Great Gildersleeve’s, which was like two blocks down,” says Saly. “Club 82 was a big one for a bit; saw the New York Dolls and others there. Phoebe’s was this place we’d go to after around 4; I’d have a cup of tea and some pecan pie, open all night on the Bowery. Mother’s was another club we’d go to on 23rd Street. And of course Kiev. Someone should do a book on the diners people in that scene went to afterward, like Riss East, which we used to go to after Max’s.”

All the hangout joints that dotted the LES contributed their pharmaceutical fun and disco fries-fed memories. A particular star-magnet was Ashley’s. “We’d see Keith Richards, Robert Plant, Jimmy Page, Bad Company,” Saly recalls. “My friend Linda, a groupie from down south, claimed to have drunk Keith Richards under the table there…”

As the groupie world waned, Saly transitioned to the more music-focused CBGBs scene, and even today, her desire to catch some midnight rays hasn’t waned. Some of her favorite acts, she tells us, on that original scene were early forgottens like the Demons and the Miamis. Befriending proto-punk legends the Dictators meant not just endless jaunts to shows all over the five boroughs, but hitting the road with that band and others like the Dead Boys. 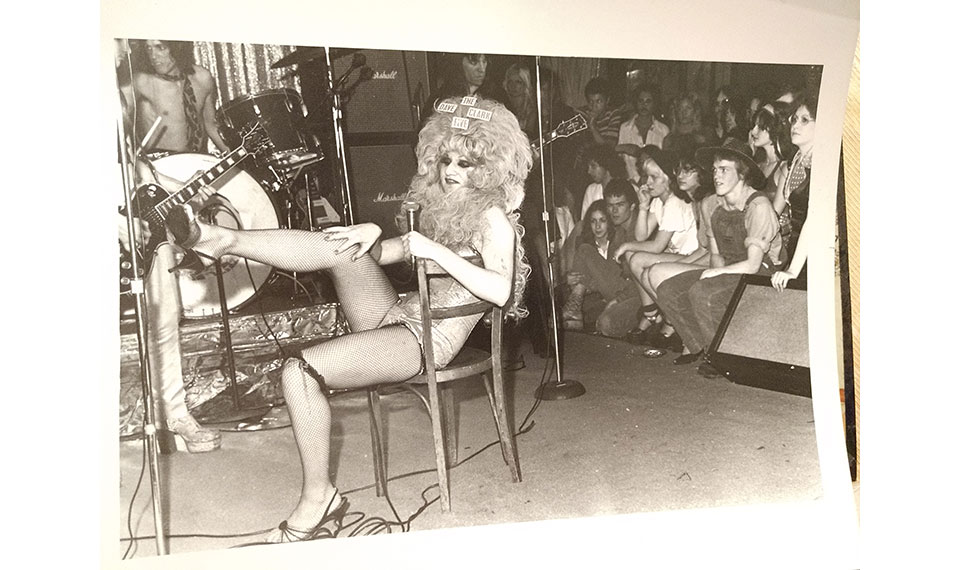 Wayne County at Club 82 (a pre-Ramone Dee Dee in the front row). Photography by Bob Gruen; from the collection of Camilla Saly

Simply surviving that fun, if often dangerous, and much mythologized era speaks to an energy and focus that led Saly to extricate herself from the more seedy backstreets and land a job at 16 as secondary market radio promotion for Bearsville Records, then home to superstars like Todd Rundgren and English rock band Foghat, with an office on E.55th Street. “I think they thought I was some kind of protégé,” says Saly. “Though not sure that was going to be my life—but people were very kind to me there. And I absolutely did not want any of them to know about that previous groupie stuff. I never talked about it.”

As she wound herself in and out of the expanding rock world, she went to the premiere of Song Remains the Same with Led Zeppelin in attendance; caught a Runaways gig at CBGB so packed she stood up on a table the whole show; saw Television for the first time opening for one of the last New York Dolls shows; and ate her first Indian meal with Foghat. Along the way, as has become a sadly redundant recounting, Saly eventually saw too many friends and acquaintances die, casualties of the darker side of that liberating revolution.

Despite all the scene seediness, what really spurred Saly’s next life choices was the even sleazier world of the major music industry. Brief stints working publicity for Danny Goldberg (former co-manager of Nirvana and record company president), Irving Azoff’s Frontline Management, and as an assistant for the legendarily prickly Linda Stein meant Saly got soured on the cutthroat ways of the music industry. But working with Stein for Coconut Entertainment meant she also worked with the historically hefty presence of Danny Fields—mover, shaker, mag editor, and manager for the Doors, Stooges, Nico, Modern Lovers, the Ramones, and more. 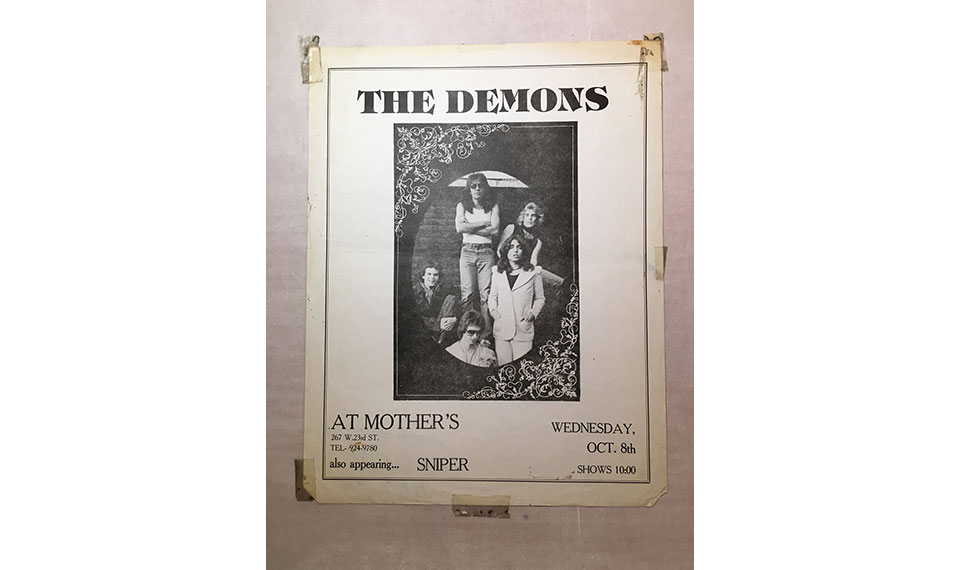 You only need to spend a short amount of time with Saly to recognize her interest in history, digesting it and spreading its lessons. Her insights and boxes of punk ephemera in her upper east side apartment are bottomless. Loads of fliers from forgotten clubs like Sir Sagamore’s, photos of hanging out at Max’s, a typed-out promotional document about Todd Rundgren written by Patti Smith, groupie magazines with articles like “Nose Job Diary;” early issues of Trouser Press; and on and on it went…

“I consider my most intense rock’n’roll running around to have ended around 1981,” Saly states. “The last clubs I went to were Mudd Club; there was Hurrah’s, I might’ve gone to Danceteria like once or twice. I knew a lot of the bartenders at Studio 54, these gorgeous blonde teenagers scantily clad in little shorts who shouldn’t have even been in there much less serving drinks.”

By the early ’80s, Saly had finished college at Pace, which led to her becoming a teacher for “at-risk” youth for the next 26 years, a profession for which she felt uniquely qualified to tackle. She could relate to these kids and would even hand out advice to budding rappers about the good and bad aspects that can come with being an artist in America. “You’ll work like hell, against endless competition for probably little or no pay,” Saly implores.

In the mid-80s, Saly tried her hand at art when she and then-husband Neal Keating and friend Mitch Highfill opened a bookstore, Frontier Books, on Bergen Street in Brooklyn. They even authored a zine for awhile. She also worked with Riverdale Avenue Books, a small, award-winning publishing company based in the Bronx that publishes cutting edge books. “I’m working on a book for them about the 1970 cult film Performance starring Mick Jagger,” she says. Today, along with her work with the Morris-Jumel Mansion, Saly heads PANYC, born primarily as a way to make sure that the tactile history of an aging scene is not lost to garbage cans. 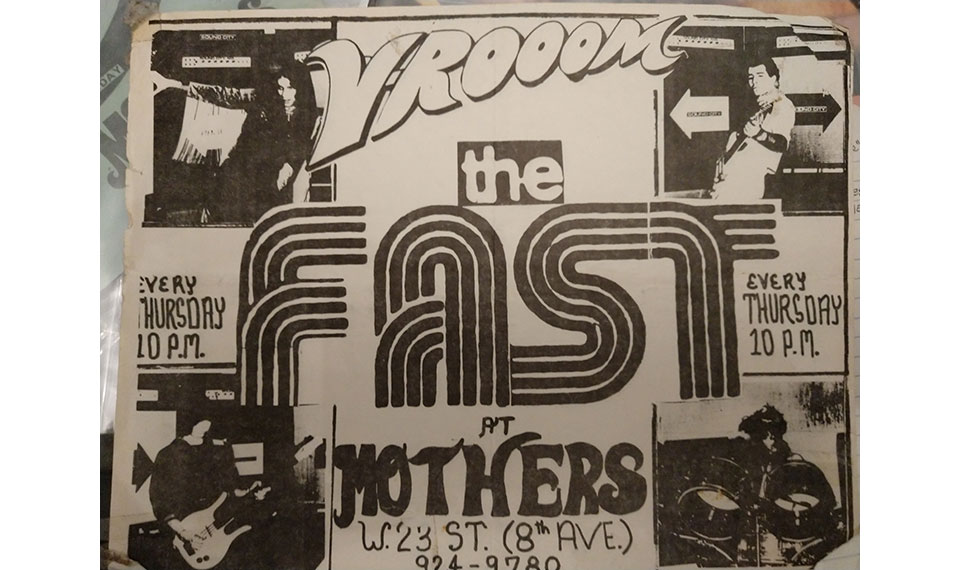 Described as being “dedicated to the collection and preservation of Punk and New York City underground music culture,” the project so far focuses on this particular place and era, although, as Saly says, “We are not opposed to the idea of stuff from other cities. Let’s see who and what’s out there, and what they want to preserve. This is still a work in progress, the idea is about 10 years old, but we’ve only started building it over the last year and a half.”

When you meet someone like Saly, who not only survived the era but was fairly meticulous in hoarding all her seminal rock’n’roll ephemera, it’s obvious that there are so many tales to tell and pictures to see. But as our world is going, it’s increasingly hard to gather all that stuff. Manhattan real estate prices automatically rule out founding a punk museum, not to mention most true punk fans would probably have a problem with such a place, but also the digestion of such arcane knowledge has obviously gone digital. Getting book deals is tough, and a practically unpaid labor of love. Hence Saly sprouted the idea of creating an online database. Since inception PANYC has facilitated the usage of punk ephemera for websites, museums, filmmakers and exhibitions including the provocative and eye-opening Punk Lust show at Museum of Sex, on display through November 18.

IMAGERY From the collection of Camilla Saly, PANYC