A love letter to the diners of yesteryear: the author and longtime New Yorker takes us back.

Seems like the kind of place you wander through the door, fall into a booth or try to balance yourself on a backless stool that tends to spin. Five AM or five PM, it’s a time warp and depending on the locale or location there’s a touch of time travel dislocation. Everything is all about a future that happened sixty or seventy years ago—lots of polished chrome, Naugahyde and Formica. It’s any diner, anywhere, and it’s the best coffee or the worst coffee, but it’s still coffee. That’s the crapshoot world of old-school, twenty-four-hour diners. You might be staring at a paper placemat printed with ads featuring everything from a local taxi service to a weekly Bingo tournament. A waitress comes over and offers up a greeting in the form of a not-quite-question: “Menu hon?” The word menu is interchangeable with the word coffee. Depending on the mood or the hour I generally stick to a variation on two eggs over with whatever, a grilled cheese with bacon or tomato, a tuna melt or a cheeseburger deluxe. The burger is ordered medium and there’s no way of telling what’s going to happen there. The tuna melt has to be closed and not open face. I rarely have an issue with however the eggs turn out and I like American cheese on my grilled cheese sandwich. I rarely stray from these choices although I have gotten brave and ordered meatloaf with mashed potatoes at both an appropriate and inappropriate hour. I always hope any coleslaw or side sauce is served in something ceramic or metal and NOT served in a tiny little snap lid container. 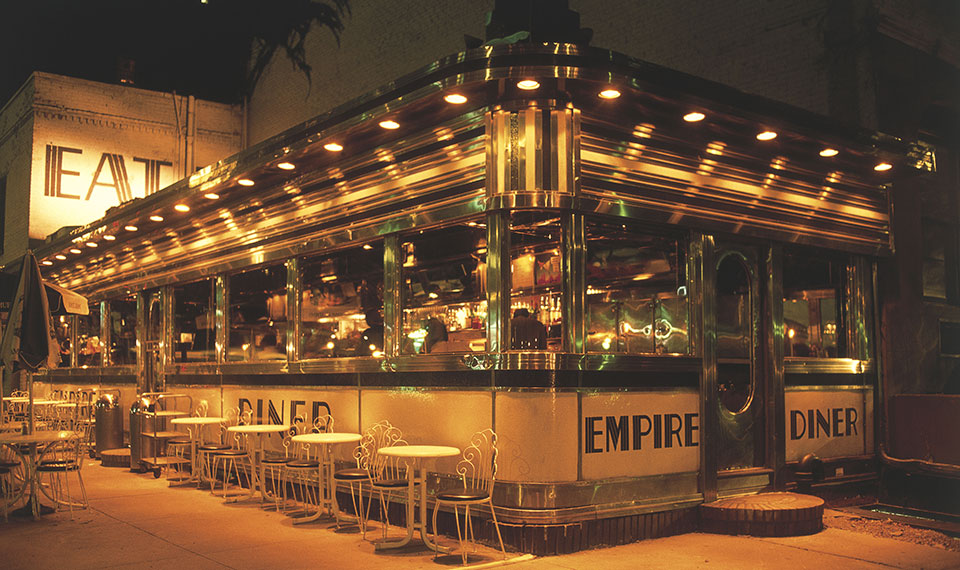 I’m easy, and operating a diner shouldn’t be difficult though getting it right is certainly hard work. Fast service, hot food (I generally avoid the salad selection) and hot coffee is all I ask. I also avoid anything served with a scoop of cottage cheese.

Thinking back to those diners of old, there seemed little difference whether you were on Tenth Avenue sitting at the counter of The Empire Diner, crashing with the post Studio 54 crowd or just refueling before heading over to the after-hours Crisco Disco on West 15th Street. Cocktails and cocaine could only get you so far, so please let’s at least try and eat breakfast before dancing till noon. The eggs were nearly all the same although the Empire’s might have had a watercress garnish on the plate. That touch of a green almost-vegetable matter was always special.

Further downtown on Lafayette between Great Jones Street and Bond was the Jones Diner. A bit ramshackle even in its heyday (who or what wasn’t) the food was good and inexpensive. If you wanted a meatloaf sandwich it was $3.25. Served on toast with a few pickle chips on the side—add just a little ketchup and it was delicious. Today I’d describe it as a guilty pleasure kind of meal. I’d land at the Jones after carousing and scavenging for sex and drugs or searching the last after-hours joint that was still serving either. I sat there several mornings with Robert Mapplethorpe who lived right around the corner, talking trash, art and club-life. One morning Robert Rauschenberg, who lived just one block north, walked by, stopped, stared and smiled. I smiled back while I sat poking at a pile of perfectly browned hashed potatoes. Sitting at the counter your coffee cup was bottomless and never empty. The bacon was crisp but chewy and never brittle. The eggs were over easy and the toast was buttered. I have no recall on the jelly or jam but everything else was perfect. It was summer 1977 and breakfast was maybe $2.50; it included coffee and a small orange juice. Bacon or sausage might’ve been an additional fifty-cents. The Jones Diner hung on, feeding a hungry neighborhood until 2002. It never much changed. The neighborhood did. 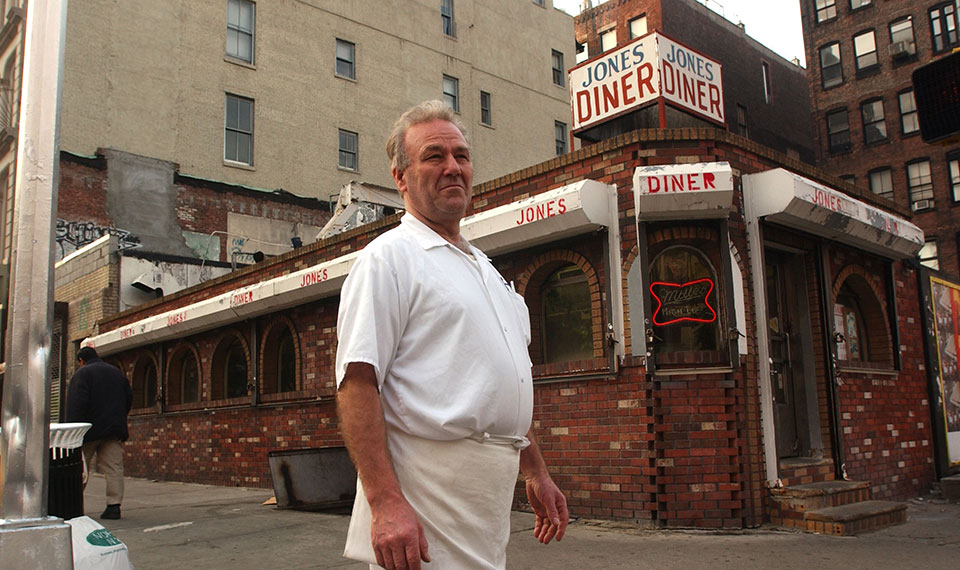 By the time 1978 rolled around people were already heading further downtown, myself included. SoHo was exploding and the neighborhood south of Canal Street was on the brink of officially becoming Tribeca. People were hungry for more of everything and Dave’s Corner Luncheonette at Broadway and Canal was there, helping to satisfy that hunger. It was a diner hybrid: a blue-collar, early morning double park-truck-stop serving food, coffee, hot dogs, knishes and egg creams. The joint was big with ample counter seating and booths around the perimeter. There was an old wooden phone booth in the corner. There might’ve even been a restroom. The eggs were cheap. The coffee was hot. The hot dogs offered both a sauerkraut or onion option and were sold along with knishes from a window on the Broadway side of the building. Then, in October of ’78, everything changed. A club opened on White Street just off Broadway at the intersection of Cortlandt Alley, two blocks below Canal Street. Dave’s Corner Luncheonette became the default dining outpost for what was arguably the hottest spot NYC nightlife had seen since the opening of Studio 54 eighteen months prior. The place was always packed and the clientele took on an edgier vibe. One night Jean-Michel Basquiat wandered into Dave’s with a posse after a long night on White Street. They ordered coffee and asked for a refill before swiping the morning donut delivery off the counter. If you were hungry and broke it seemed like a good idea. The club located at 77 White was Mudd. Dave’s Corner quickly became legend. 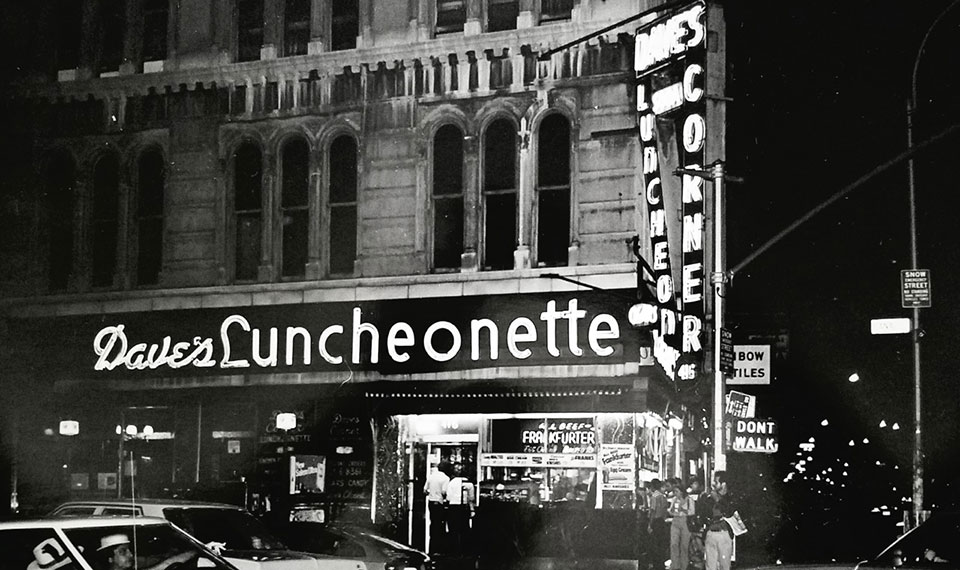 I remember going to the Munson Diner on West Forty-Ninth Street in Hells Kitchen sometime in the early or mid-1980s. The place had been around since the mid-1940s and was now operating as a diner by day and a club by night. I went once and came away with a who cares feeling. I never ordered eggs or a meatloaf sandwich. I might’ve ordered a beer. The Munson Diner, manufactured by a railway dining car company in 1945 was moved intact to upstate Liberty, New York in 2005.

The Market Diner, opened in 1962, was re-designed in 2006 with a super-stylized zigzag roofline and large windows looking out onto the Westside Highway from the corner of West Forty-Third Street. The place was just a few blocks from the Munson. I have vague memories of wandering through a labyrinthine basement during some one-off party or club night. The place was packed. Again I ordered a drink, left in a cab and headed downtown. The design alone made the place a semi-landmark but it wasn’t enough to save it. The Market Diner closed in 2015.

It’s been a while since I’ve sat at the counter of a twenty-four-hour, open seven days a week, New York City diner. I still love a “breakfast special,” a good cheeseburger with fries, the occasional tuna melt and even a slab of meatloaf served with mashed potatoes. Someone will surely do something to fill the void left by the fondly remembered diner world of polished chrome, Naugahyde and Formica. New York City loves a good diner.