Explore The Art of Punk

“I look at these posters, and it’s a thrill to go back to that time,” former Sex Pistol and Public Image Ltd frontman John Lydon said after walking through the Museum of Arts and Design [MAD] exhibition Too Fast to Live, Too Young to Die: Punk Graphics, 1976–1986. “When I met [fellow Pistols] Steve, Paul and Glenn, they were kind of aimless,” Lydon recalls. “But we formed the Pistols and from that day on we spurred all this.”

The Museum of Arts and Design brought Lydon to Manhattan for the opening of the exhibition, which charts the trajectory of punk from its earliest days to the mid-’80s post-punk and New Wave era, to discuss a few of his favorite topics: the enduring legacy of punk, the genre’s arresting graphics, and, most especially, the arguably superior UK punk scene in comparison to its New York City counterpart.

“None of this would be a movement at all, but for the Pistols,” Lydon continued. “Many [punk bands] had records out before us, but they’d watched us first. So what I’m doing is representing my culture. There’s a class culture, and a class culture in British culture—a very serious one, and if you’re born poor, you’re trashed. But our words helped change attitudes and opened doors. You’ve got to realize, it was dangerous times. To be openly seen as assaulting the concept of the monarchy—that was pure treason. But it was all done with a sense of humor, as you can see here. It was not openly violent, aggressive and hateful. That’s never going to wash because that’s going to cause division. You need to unite people, and humor is the way to do it. Let the savagery of content be there, but you must be able to laugh with it, not against it.” 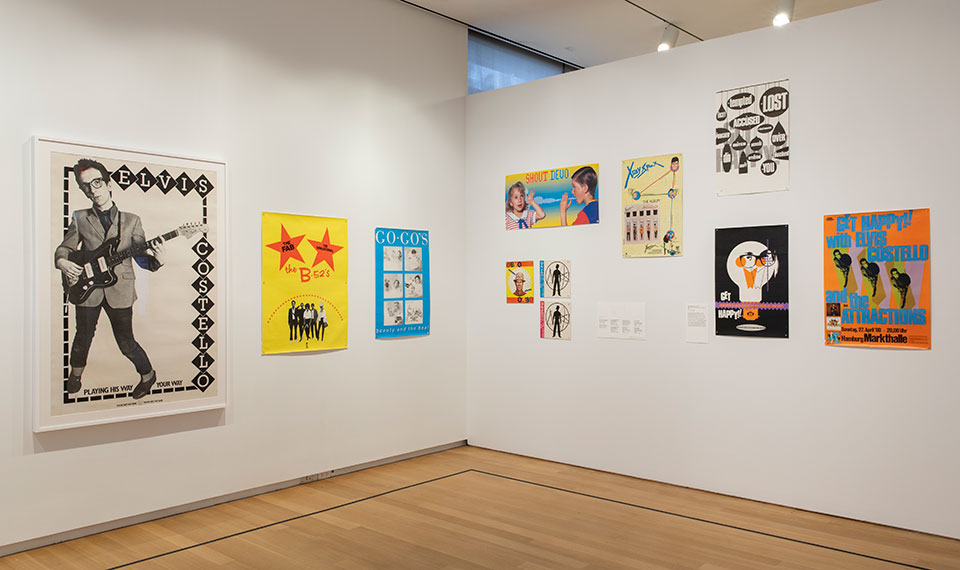 The MAD exhibition, which is open now through August 18, explores the punk and post-punk movements via its unique and striking graphic design. It features more than four hundred of punk’s most memorable graphics, including flyers, posters, album covers, promotions, zines, and other ephemera, including many from New York City’s punk scene, like flyers from CBGB’s, album artwork and concert posters for shows by Blondie, the Ramones and many others, as well as early issues of Punk magazine.

“When looking around the exhibition and seeing the difference between what we were doing in England and the artwork that was being used here, it’s important to remember that the people doing the graphics were working directly with the band,” said Malcolm Garrett, whose memorable, groundbreaking graphics for the Buzzcocks are featured in the exhibition. “I can’t play an instrument, but I’m a graphic designer and I was totally influenced by hearing “Anarchy In The UK,” and seeing Jamie Reed’s graphics for the band. I was living the life and I felt I was part of the team. It was very important to the Buzzcocks to have a completely different and individual graphic identity from the Pistols and The Clash and all the other bands.”

“In the Pistols, we kept our artwork really, really, really in-house,” Lydon confirmed. “It was us. It was no separate talent outside of the band. And rest assured, as much as I provided all the words, I definitely contributed to the artwork you see here. But that’s not taking anything away from anyone. It was a shared event.”

Remarkably, the exhibition is just a small sampling from the private collection of Andrew Krivine, a New Yorker who visited the UK in the late ’70s, only to be swept up in the youth culture of the times. “I would go to London every summer as a kid to visit my cousin, John Krivine, who invented Acme Attractions, which later became Boy [London],” Krivine recalled of the King’s Road clothing store and hangout, where he met many of punk’s most famous names. “So the first wave of my collection came out of my simple obsession with the music. I just started collecting the posters and fanzines and anything I could get my hands on because I was just so taken with everything that I was seeing and hearing around me.” 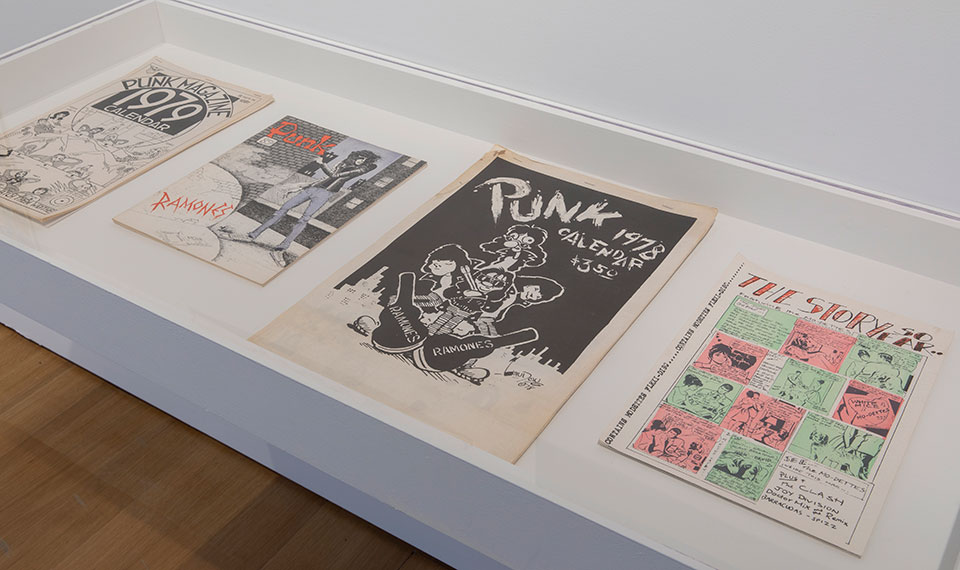 Krivine began collecting concert posters, clothing and other items born from the punk movement, eventually amassing a collection of several thousand items. Originally drawn to the music, Krivine soon found himself captivated by the visual expression of punk, as well. The dress, hairstyles and onstage theatrics of punk’s most notable artists went hand in hand, according to Krivine, with a subcultural phenomenon that also encompassed the visual arts, fashion, and graphic design.

“For the most part, it was the British aesthetic that spoke to me—at least at first,” Krivine admitted. “It’s not being an Anglophile, but I think if you look at the body of work, it shows that the American scene didn’t have the post-World War II tradition of the art schools, which along with health care and housing, were something the Liberal government in England had really invested in, which exposed lower- and middle-class kids to the arts in a way that we’ve never had here.”

As MAD’s director, Chris Scoates surmises, “Too Fast to Live, Too Young to Die charts punk’s explosive impact on design and examines its complex relationship with art, history, and culture.” A proponent of the significant impact of New York City’s punk scene—and its artwork—on the genre, Scoates ensured the local influence would be illustrated via the museum’s slate of events running alongside the exhibition. “Punk questioned everything,” he said. “And it’s that spirit of inquiry that is driving MAD forward today, presenting and debating innovative works and ideas with lots of energy, color, and noise.”

During the course of the exhibition, MAD will also present a punk cinema series, featuring films from Mexico, Japan, Cameroon, and Hungary that underscore how punk came to become a rallying cry for youth movements around the world, and that illustrate the enduring nature of the music and art associated with the genre.

PHOTOGRAPHY Courtesy of the Museum of Arts and Design