DEMYSTIFYING THE GENESIS OF SAMO©

Al Diaz holds the distinction of being one of the chief creative forces behind the genesis of graffiti art, and a legendary status as its most prolific pioneer. In 1977 he devised the tag SAMO© with his high school compatriot Jean Michel Basquiat, an amorphous identity that signified and satirized quasi-religion combined with corporate branding. SAMO© advanced the surfacing evolution of the burgeoning movement with its poetic messages confronting conformist mentality, art world corruption, and bourgeois mores. Its unprecedented phrasing merging Neo-Dadaist wit with innovative design motifs roused intrigue amid the epicenters of SoHo’s art scene and sent ideas coursing through the city’s bloodstream in a manner prescient of today’s digital information effusion.

This month, marking the 30th anniversary of Basquiat’s untimely passing, the aptly-named Same Old Gallery has materialized Basquiat’s former home and studio space, a historically landmarked building at 57 Great Jones once owned by Andy Warhol and now housing the clandestine Bohemian Restaurant. The exhibition features current works by Diaz resonant with the integrity and fervor that define his ethos while honoring the origins of SAMO© and the legacy of his late collaborator.

The show coincides with the publication of Diaz’s new book SAMO©…Writings 1978-2018, a graphic and literary history of SAMO©, demystifying its conception and delineating its continuing narrative lineage. This weekend, the gallery will host a book signing with Diaz on Saturday, October 13th with an additional artist’s talk and signing on Sunday, October 14th at 3pm.

In anticipation of these events, Diaz shared some privileged disclosures about the book and its history; affirming his adept-ship as a compelling linguist and his character as a bonafide visionary.

What sparked the initial connection with Basquiat that led you to create SAMO?

Al Diaz: I met JMB in the fall of 1976. We became friends because we shared a lot in common. Our tastes in music, art, irreverent natures, preoccupation with sex, drugs and general hedonism, being of Hispanic origins and with a subsequent interest/love for language.

Can you tell us some first-hand ideas about the philosophy behind SAMO and the message it sought to convey?

AD: We basically believed in nothing or not much. SAMO© was an ever-changing product. It was a vehicle to express however we felt about whatever. We had no philosophy other than, do whatever the fuck you want now and worry about the consequences later. This is precisely how we lived our lives. There was no one specific message being conveyed. SAMO© could be an alternative to this, an end to that. (Fill in the blanks.) We made sarcastic and cutting remarks about consumerism, middle-class values, religion, philosophy, nowhere politics, everyday awkwardness, mediocrity, mundanity etc. Our teenage nihilistic views on “the pointlessness of it all”…

What is it about the graffiti art that makes it an effective medium vs. formally institutionalized artworks?

AD: I have been involved in NYC graffiti culture since the very early years (1971). We began SAMO© as a private joke. Seeing the potential it had as a suggestion of a cult or religion. I suggested we create a graffiti campaign to spread around in the tradition/spirit of JESUS SAVES or PRAY (the most prolific religious graffiti of all time). Before the internet, there was the NYC transit system. By 1978, it had already proven to be a most effective method of spreading a message. One has to make a pilgrimage to museums. The subway brought traveling artworks to various parts of the city. SAMO©, however, was concentrated on the streets of lower Manhattan, not the subway. We were spending most of our time throughout Chinatown, Tribeca, SoHo, West Village, and the Lower East Side.

What political and ideological ideas drive your artwork now? In what ways has it changed since your origins with SAMO©?

AD: My politics are very simple and my feelings about consumerism and middle-class ideology have only been confirmed since my teen years. I express an anti-totalitarian, anti-fascist, sentiment. I feel that Americans have become dangerously complacent and sheeplike. Distracted by technology, shallow cultural iconography and a form of materialistic slavery. In this respect, it is a more adult version of the SAMO© messages. A sort of wake-up call.

As one of the pioneers of graffiti art, now that it is such a widespread medium, how do you feel about its present stage of evolution?

AD: I still notice graffiti but do not actively follow the new generation of writers. I’ve been involved in graf culture for 47 years and cannot get too excited about the stuff anymore. I do see that a lot of the lettering style has a certain homogenous or generic quality. Hand-style is not very impressive anymore. The letters have a cartoon character suggestiveness to them and the charm fades rather quickly. However, I do think that it’s cool that it has become such a widespread phenomenon but like all “once illicit and now more accepted” street cultures, it has become diluted.

Now that you are considering SAMO from a retrospective standpoint, what are your feelings about your collaboration with Basquiat and the different trajectories your careers took since you were teenagers?

AD: I have published a book on the history of SAMO© primarily to define and clarify its history to those who were not around in 1978-79 (when SAMO© was most visible). I continue to create and illicitly place my SAMO© writings (in public) on a daily basis so the notion of retrospect is inaccurate. It is a thus far overview. JMB and I were two very different individuals. He had his agenda as did I. I am motivated by getting my message across and not deliberately trying to become famous. My collaboration with JMB has proven to be much more historically important than we ever imagined. It was a long time ago and I have lived through quite a lot since then. His energy and brilliance still inspire me to keep moving but I do not romanticize the past. I do what I do for my own need to create. I hope that I can perhaps inspire others. There is no question as to JMB’s effect on today’s young artists and art enthusiasts. I was undoubtedly lucky to have worked with such a dynamo!

The exhibition is on view through October 20 at Same Old Gallery, 57 Great Jones Street, New York. The artist talk and signing event will be held on Saturday, October 13 from 3pm at the gallery. 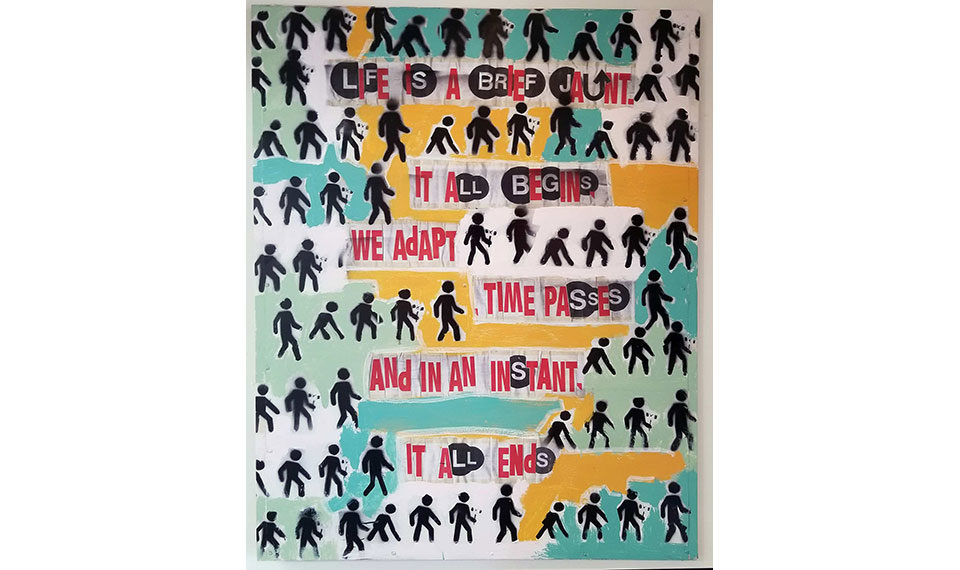 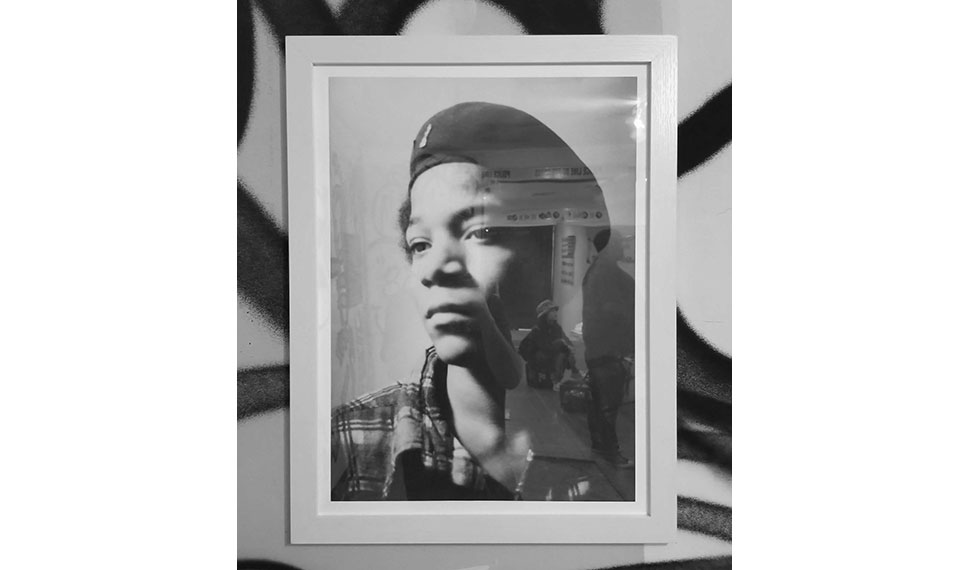 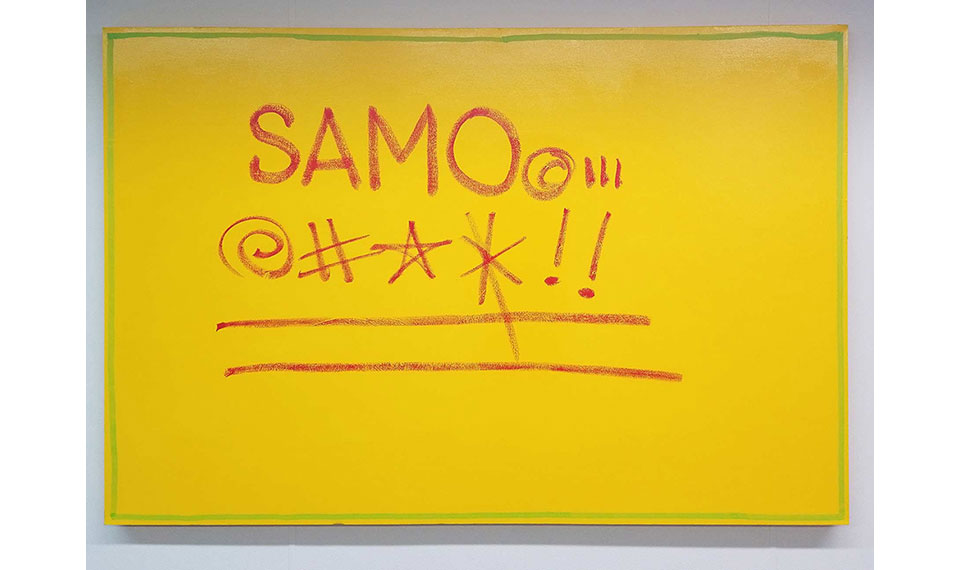 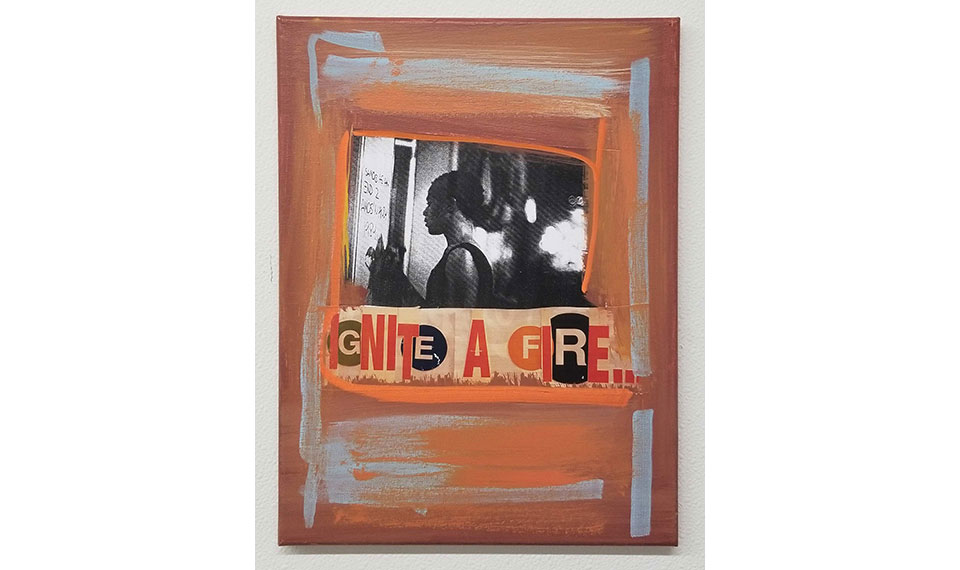